Created by Milton-based couple George and Janet Humdy-Morrison in the year 2000, the Morrison Golf Classic offers attendees the opportunity to fellowship, support a few worthy non-profits, and learn more about African-Americans who have contributed to the game of golf. Plus, it’s truly a family affair since Mr. and Mrs. Morrison co-produce the annual event with their son, Sekou Morrison (professionally known as Sekou Writes).

For its 19th year, the Morrison Golf Classic again raised money for two notable non-profits: the Urban Golf Academy and Zion Union Heritage Museum. The Urban Golf Academy is a Boston-based organization created by Keith McDermott to shape “the lives of African-American youth by introducing them to values inherent in the game of golf.” The Zion Union Heritage Museum, located in Hyannis, was created by John L. Reed to educate visitors about the contributions of African-Americans and Cape Verdeans to the history of Cape Cod.

On Saturday, August 24, an early round of golf at Falmouth Country Club was followed by a golf putting clinic and an all white party luncheon which was catered by Jerome Humdy. Soulful live music was provided by Angelena Hightower and The Unit, with a special guest appearance by NYC-based singer, Rae Walker. During the luncheon, the keynote was given by Boston radio personality and author Carole Copeland Thomas, who talked about African-Americans pioneers in the world of golf. She also signed and sold copies of her various books.

On Sunday, the Morrison Golf Classic relocated to Hyannis, MA for a culmination brunch at The West End, where the Swing Easy Jazz Band was gracious enough to let Rae Walker sit in with them. Afterward, brunch attendees were invited to a tour of Zion Union Heritage Museum which was offered by the museum’s founder, John L. Reed.

The date for the 20th annual Morrison Golf Classic has been set for the weekend of August 21-23, 2020 and is rumored to be the Morrison family’s final event! Don’t miss it! Learn more and register online at www.morrisongolfclassic.com.

[Please see article below from the Bay State Banner] 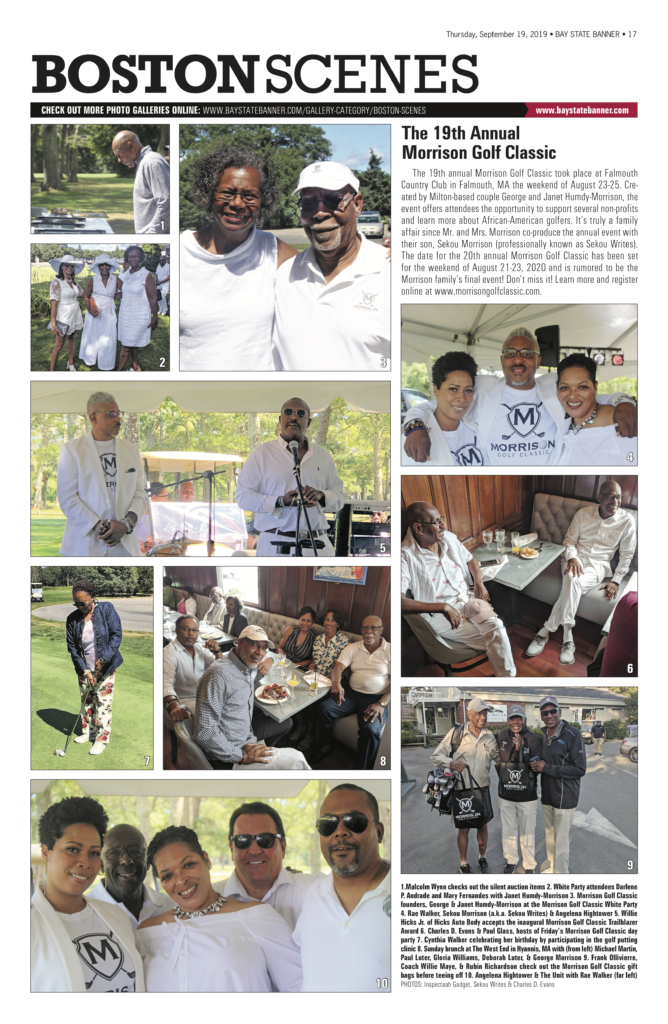